Gardening enthusiasts grow giant hogweed because of their bold, tropical-looking leaves, white-clustered flowers that grow in a large umbrella-shaped heads, and the sturdy, architectural look. Giant hogweed has a presence that commands attention, growing 1.5 to 5m tall in flower; however, it has escaped cultivation and is HIGHLY INVASIVE, and poses SIGNIFICANT HUMAN HEALTH RISKS.

Cow parsnip blooms in July. Flowerheads are much smaller than giant hogweed, with a diameter of only 0.2m (20cm). Has 15 to 30 ray flowers per stem. 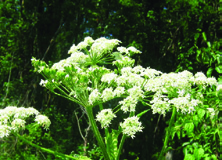 Cow parsnip leaves are NOT shiny, are broader and less serrated than giant hogweed. 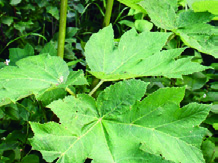 Cow parsnip flower and leaf stalks are usually green, but lower stems can also have purple. However, purple marks are NOT blotches, streaks or spots. Flower stalks and leaf stems are smooth and have very soft hairs.

Giant hogweed blooms in mid-August. Flowerheads form a large umbrella shape and grow up to 1.5m (150cm) in diameter. Has more than 50 ray flowers per stem. 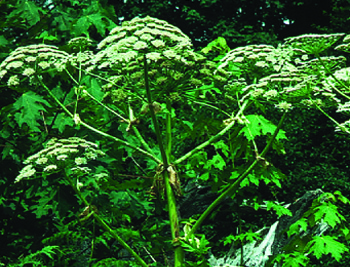 Giant hogweed leaves are shiny and large, with leaf edges very coarse and serrated, like a jagged saw edge. 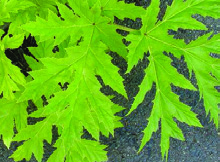 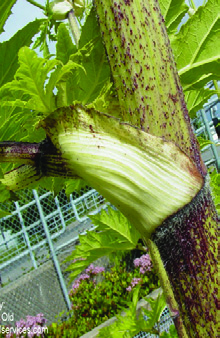 Giant hogweed grows well in disturbed areas with moist soil, such as vacant lots, uncultivated or waste areas, riverbanks, along roadways, and in agricultural lands.

Giant hogweed sap contains toxins that causes severe dermatitis when it contacts skin in the presence of sunlight (i.e. phytophotodermatitis). Effects may include welts, rashes, and blistering, followed by pigmented scarring that may persist for as long as six years. Toxic sap is found in the leaves, stems, flowers, and roots of giant hogweed. Contact with sap can occur by brushing against any broken plant parts, handling plant material, or even by touching tools or mowing equipment that was used for giant hogweed control.

While exposure to cow parsnip sap and sun can result in a nasty rash, in the case of giant hogweed, the skin can blister to look similar to a third degree burn. A trip to the hospital is recommended if you suspect you have been poisoned by hogweed sap. While the blisters will eventually heal, the purple scars left behind may last a lifetime. If sap from giant hogweed gets in the eyes it could lead to permanent blindness.

Giant hogweed is highly competitive due to vigorous early-season growth, tolerance of full shade, and seasonal flooding. Infestations can cause erosion of stream banks, particularly when winter dieback exposes soil to rain. Because of its large size and rapid growth, it can quickly dominate invaded ravines and stream banks. This substantially reduces the amount of suitable habitat available for native plants and wildlife.

Background and Distribution in Canada

Giant hogweed is a member of the parsley or carrot family and was first introduced to North America as a garden ornamental. It is an invasive, alien plant that originates from the Caucasus Mountains in west central Asia where it grows in subalpine meadows and forest edges.

• Alberta, Saskatchewan, and Manitoba: Not present.

• Yukon: Suspected, but not confirmed.

• Northwest Territories and Nunuvat: Not present.

Plants can produce 50,000 – 100,000 winged seeds that can float for three days before becoming water logged and sinking. Seeds can remain viable in the soil for up to 15 years.

Giant hogweed grows up to 5m in height with large umbrella-like white flowerheads that reach a diameter of 1.5m. 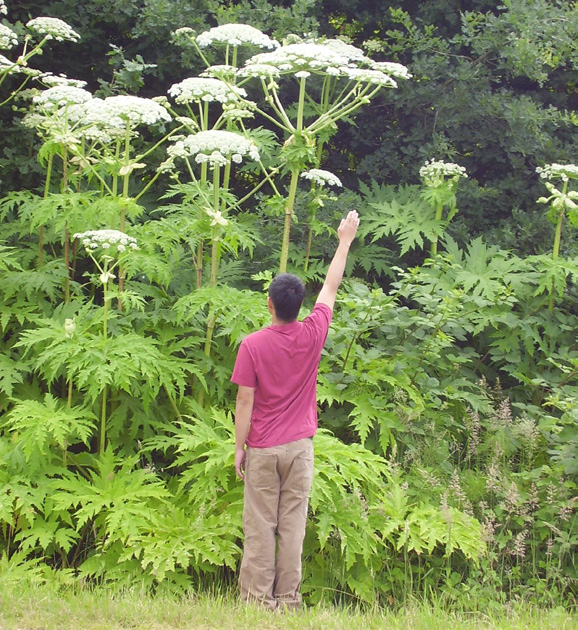 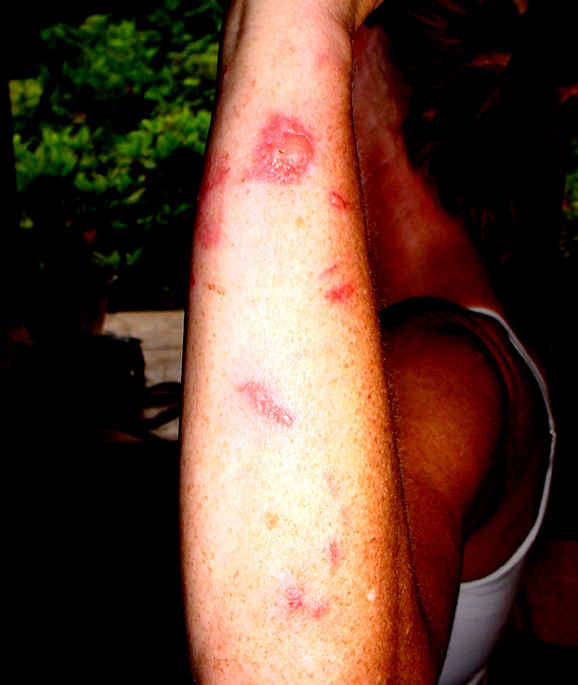 During any attempts at hogweed removal, make sure you have no exposed skin, wear glasses or goggles and conduct the removal on a cloudy day. It is a good idea to clean up thoroughly (shower and wash clothes) immediately following the removal activity.

Giant hogweed only reproduces by seed. Prevent seed development and you will keep the plants isolated to their original location. During the summer, it is not recommended you try to remove the plants. They are much too large and sappy at this time of year. Rather, in summer, simply cut off any developing flowers. This will prevent the plant from producing any additional seeds.

In spring, just as the new leaves emerge, the plants are small enough to effectively handle. At this stage (May-early June) you can use a glyphosate-based herbicide (e.g. RoundUp) or if you prefer to physically remove them, then use a sharp spade to cut the shoots from the root about 3-4 inches below ground level. Giant hogweed will not regenerate from the roots left behind. If the shoot is cut 3-4 inches below ground level, the plant should die. It is important to monitor the site for germination of seedings for several years following removal.

Place plant material (not flowers or seeds) in a large heavy-duty plastic or mesh bag and landfill. Alternatively, dry and incinerate plant material away from any people-frequented areas. If flowerheads have formed, carefully cut them off, place them in sealed plastic garbage bags, and landfill. Do not compost this plant! Always check the regulations in your province before burning or landfilling plant material. When in doubt about how to dispose of invasive plant material, contact your provincial invasive species council.

Stay up to date on the latest news about invasive species in Nova Scotia.